This African Grey Chick is 10 days old and a complete sweetie. We removed him from the nest a little too early ( I think) but he is feeding well and gaining weight. Two days ago the African Grey Chick weighed 130 grams and today a whopping 160 grams. That is a 23% weight gain. 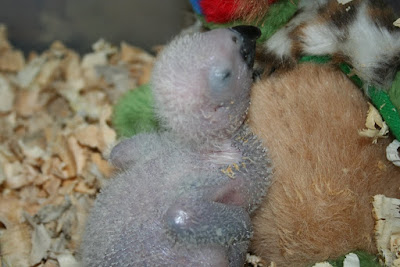 Being alone seems to be the only problem this little one has, but the soft toy we put in with him appears to help ease the loneliness a little. He is much quieter than the other two, but makes soft noises when he notices you or you stroke him.

He is still a bit "naked" and looking at the tiny shafts of feathers appearing, it seems like he will still be that way for a while. At he moment the down on his head gives him the appearance of a semi-punk (which to me adds to the cute level substantially.) 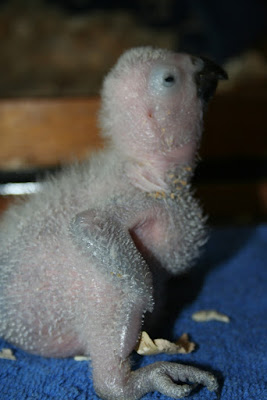 He likes to eat and because the crop didn't clear enough in two and a half hours, we moved the feeding times to every three hours. (After the short break with the other two, this again takes a little getting used to.)

The other two chicks have settled in well with their owners and the reports I get are that they are absolutely the most clever and most cute parrots ever hatched. Hmm, I thought so from the start, but it's great to get positive feedback from their owners. Needless to say, both are being spoiled rotten and are treated like children in the home.

I hope you will enjoy this journey with the growing African Grey chick as much as we do.
Posted by Yolande Pienaar