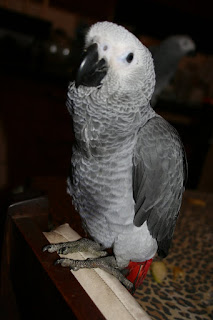 Our Congo African Grey chicks are now 6 weeks old and I thought it would be interesting to show a comparison between the African Grey babies at 3 weeks and at 6 weeks. The chicks showed an interest in soft foods today for the first time and after realizing the food is quite tasty, they ate and played with the food for nearly an hour.

The bare wings now have feathers and even the long feathers at the tips of the wings are developing quite fast. 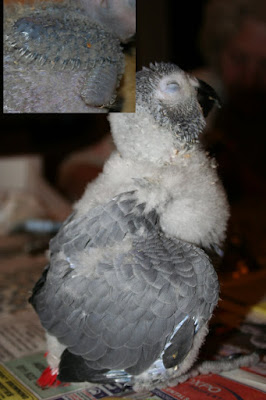 The red tail feathers, which are unique to the Congo African Grey parrots, have also developed and three distinct rows of tail feathers are present. Note the lone red feather just above the tail and the tuft of down just below. 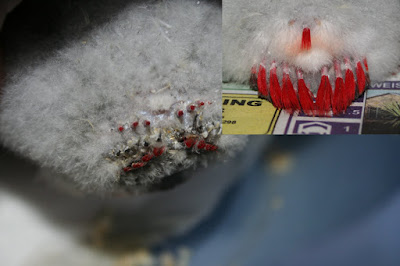 We weighed the chicks today and the smaller one weighs in at 550grams while the larger chick weighs a roaring 650 grams. They have more than doubled in size in three weeks. 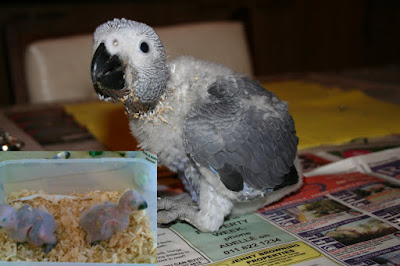 During the past weekend we cared for a 10 week old African Grey parrot. "Gogga" the parrot baby is already weaned and only wanted to taste the baby formula because the little ones ate. At one stage we had a total of five parrots ranging from 6 weeks to 8 years old on the kitchen table and it made for interesting play time. Gogga enjoyed climbing all over hubby while the little one sought refuge from the miniature windstorm Gogga created. 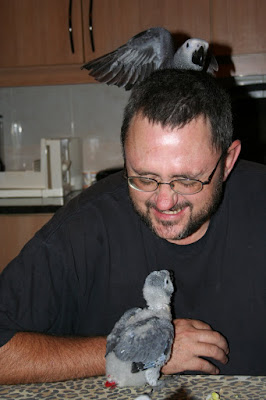 In the photo's of the African Grey parrots below you can clearly see the difference in the eyes of an adult and baby parrot. The adult African Grey parrot has a yellow ring around the black pupil while the baby's eyes are nearly totally black.

We have already found a home for the smaller baby African Grey parrot, but will only deliver after the chicks are completely weaned and able to fend for themselves.
Posted by Yolande Pienaar