How Much to Feed African Grey Parrot Babies When Hand Rearing

The amount of formula to feed an African Grey Parrot chick and the times between feedings vary from bird to bird.As stated in a reply to a previous post, African Grey chicks are like children – each has their own needs and personality.

How Often Should you Feed the African Grey Parrot Chick?


The general rule of thumb is to feel the chick’s crop. If the crop is nearly empty, it is time to feed the baby.

What we usually do is to start feeding every three hours from the time we take them from the nest – usually at three or four weeks. We monitor the crop clearing carefully during that time to make sure the crop never completely empties. You should also take care not to leave too much food in the crop as this could lead to illnesses in the chick.

Here is an African Grey parrot chick with a nearly empty crop. 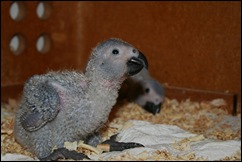 And here is the chick with a full crop. 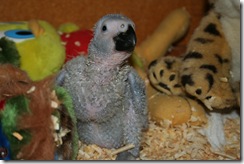 Your bird therefore mostly dictates how often he/she should be fed.

How Much to Feed your African Grey Parrot Chick


When the chick is still very small, you need to feel the crop to make sure you don’t under or over feed the chick. When the crop is feeling stiff, not hard though,  the chick will have enough formula for the time being, Overfeeding can lead to the chick bringing up the excess formula and underfeeding will be detrimental to the bird as it would stem development of the bird. As the parrot babies get older, they will stop feeding when they’ve had enough.

They will also begin to show interest in other foods like shelled sunflower seed, fruit and a boiled mixture of other seeds. From about six to eight weeks we introduced these foods slowly before and after feeding the formula to get the birds accustomed to a variety of other food except formula and sunflower seeds.
Posted by Yolande Pienaar