Yes, you read correctly. All child-, animal- and woman abusers are cowards. How can I make such an generalization?

Easy, I worked in the courts for 10 years and this included being a criminal prosecutor, criminal magistrate and commissioner of the children’s court. After that I practiced as attorney, so I dare say I have some (although not perfect) insight into what character traits an abuser has. How do I justify the statement? This is my personal opinion not something I read somewhere:


1. Abusers are cowards because they are too afraid to attack someone their own size who can defend themselves against the abuse.

2. Abusers are cowards because they are afraid to face up to what and who they are – they would much rather blame the abuse on the victim by alleging the victim asked for the abuse.

Today I need to share with you the story of Jack and how Jack came to live with us. If I seem harsh, please understand that I have been mad enough to give a puffadder (snake) an open mouth kiss for the last nearly two months.

We live on a farm just outside Balfour on the old road between Balfour and Greylingstad. Due to the Burnstone Goldmine which opened about 4km away, this road carries a lot of traffic. Heavy vehicles make use of the road day and night and because we are situated on a small hill, the speed limit is very seldom adhered to. Road works on the new road linking the towns caused long waiting periods so most people chose to use this road instead to save time. 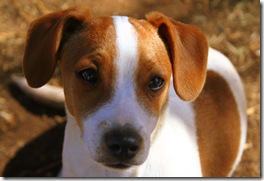 I have three dogs of my own, two Jack Russel terriers and a Boerbull, which I adore. The first thing we did when moving in was to ensure the yard is fenced in so that the dogs would be safe. The two Jack Russels, Mica and Terri (for terrorist) sleep with us every night and accompany us wherever we go. They are like children in the house and everyone adores them.

A couple of weeks ago, I think it was about 7 weeks ago, my son called me to watch as people in a newish Opel Corsa motor vehicle put two small dogs out of their car opposite the entrance to our farm. At first I couldn’t believe what I saw, but then the Corsa slowly pulled away in the opposite direction and the two dogs trotted behind. The car then accelerated and disappeared from view. How far the dogs ran to try and catch up with their owners, I don’t know, but over the course of the next few weeks they often ran in that direction, obviously trying to see if their owners will return for them.

Jack and a Fox-terrier-breed dog were dumped next to the road like yesterday’s garbage. The most upsetting part of this was that the dogs were in good condition and well cared for. I can’t adequately describe the feelings (anger, disbelief, sadness) which I experienced that day. We drove up and down the road to try and find the dogs, but they were nowhere to be seen.

Two days later we saw the two dogs in our fields. They had managed to dodge the traffic and stay alive. Bear in mind, these dogs were not used to fending for themselves and I can’t even begin to imagine the terror they went through trying to find something to eat and a safe place to sleep. At that stage it was still bitterly cold. What really broke my heart is when we tried calling them and they hurried away. They were petrified of humans.

As they ran away, the fox-terrier struggled to keep up with Jack and Jack would run for a while and after realizing his companion lagged behind, he would stop, look around and wait for the fox-terrier to catch up. They disappeared in the same direction the Corsa drove off in and we didn’t see them again for a couple of days.

About a week later we drove into town and found the dogs next to the road going through garbage. Their condition were terrible. Both dogs were thin and scruffy. Upon our return to the farm, I put down some food next to a dilapidated building some distance from the house in the hope that they would find it.

The first day the food remained untouched, but the next day the plastic tin was empty and dragged some distance away from the building. I thought they were too scared to navigate close to buildings for fear of human interaction (they must have been chased away so many times while trying to get food) and I moved the container with the food to our entrance gate, close to the road. In the photo below you can see the long driveway leading to the busy road. 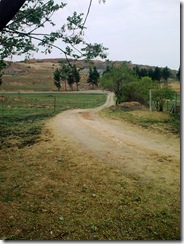 Over the next couple of weeks they often ate from the tin and regularly visited the food source. All of us tried several times to approach the dogs, but the ran away as you approached. Two weeks ago I decided to move the tin halfway up the driveway to get them away from the road.

Jack came to eat, but his friend was not with him. We drove up the road and our worst fears were realized. The fox-terrier was hit by a truck and lay dead in the road. Seeing the terrier lying on its back with its feet tucked up, was a sight I wish on no animal lover. He/she looked so much like our own dog, Mica that I cried for hours, cursing the people who left the dogs. How could anyone call themselves human if they allowed this to happen to an animal that only asked for food and love and in return rewarded you with unfailing loyalty and love?

Jack was now alone and despite the food, he remained painfully thin every time I saw him. About 8 days ago, Jack first investigated the house and surroundings. He must have been extremely lonely without his friend, but he was skittish. It was over the lunch hour and the yard was quiet with nobody walking outside. From my office window I saw Jack sauntering closer and closer to the house. I held my breath as he went to lie in the shadow of an oak tree close to the gate. When my husband returned from town, he didn’t run away immediately, but the Boerboel saw him and barked. Jack ran like lightning down the road.

Over the next couple of days he remained close to the house but didn’t venture into the yard again. He ate his food regularly and last Friday he watched me from the nearby hill as I walked down the road to put his food in the tin. The whole of Saturday we saw him around the yard, within viewing distance of the house and we moved his tin to the tree just outside the gate at around midday. Being closer to the house, I could now also put some water in a container for him. We watched him eat and drink water from a safe distance.

By dusk, I checked on the food and water again and as I straightened from pouring the food into the container… there was Jack…crawling towards me…waving his tail. Between the tears, I went down on my knees and he immediately turned on his back so I could scratch his belly. I could feel every single rib with barely any flesh under the skin. He whined softly and wagged his tail constantly. I called my husband to help me introduce him to the rest of the family and Jack immediately went to him and allowed him to pet him.

Jack was filthy, his body riddled with ticks and fleas and before we took him to meet the rest of the family we dosed him with Frontline to help him get rid of the pests. The introductions went well, but Jack refused to let either me or my husband out of his sight and whined when we left him. After a hearty meal and plenty of water he settled down on the enclosed veranda for the night. He was obviously used to being indoors and early on Sunday morning we let him out without him making a mess inside the house. Now, Jack sleeps inside on a warm bed with food and water always on hand. He already accepted us as his new family and is very protective of everyone in the family.


Now meet Jack and tell me why anyone would dump this cutie next to the road and leave him to die. 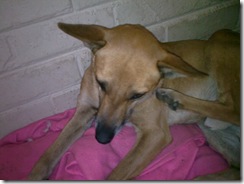 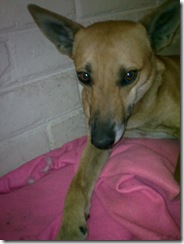 So, what constitutes animal abuse?

Failing to provide an animal with sufficient food, water and shelter are the most common methods of animal abuse. Many people want to have a pet and buys one without really thinking it through. Animals have needs just like humans do. They cannot fend for themselves and are totally dependant on their human owners to provide for them.

When the small puppies grow into bigger dogs, many dog owners feel the dogs are too much work. This happens every day, but it still doesn’t excuse the dumping of animals next to the road and leaving them to fend for themselves. The SPCA has branches all over the country and when animal owners feel they are no longer able to care for the animals, doing the humane thing would be to approach the nearest SPCA to assist them in finding a new home for the animal. The SPCA website has a list of telephone numbers that are regularly updated and help is only a telephone call away.

Like I said, abusers are cowards too afraid to face up to what they really are.