Using Tomato Seedlings or Germinate Your Own Seed

During the previous season (2011-2012) we decided to germinate our own seed. We obtained Divine seed (the name of the variant is actually Divine) and proceeded to plant them in polystyrene seed trays. And waited. And waited. The seed germinated slowly and by the middle of November we were nowhere near transplant stage.


I did an internet search and could find only a few places to buy tomato seedlings. And all of them were more than 200 kilometres away. After phoning around I happened upon Terra Nova Seedlings, situated a mere 50 kilometres away. The seedlings also cost about a third of what the seed did. We planted the seedlings inside the tunnel at the end of November – directly into the soil, enriched with fertilizer and Pine sawdust a couple of weeks before. 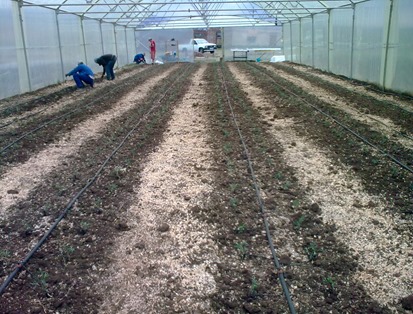 
Not having any way to find the correct fertilizer, we used a general purpose fertilizer for vegetables that you buy at your local farmers shop (Afgri) and used it as a foliar spray. This we did at three -week intervals. For bugs we used Malathion and for fungus Funginex.


The seed we planted germinated and by 17 December 2011 they were at last ready for transplant. 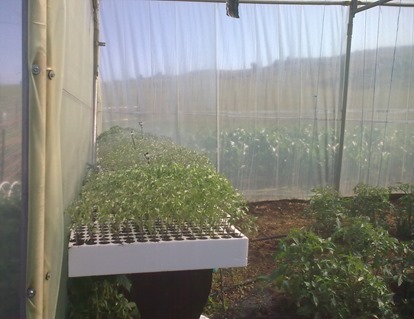 These seedlings we planted outside on 4 January 2012 with no protection. We staked the tomato plants with Poplar saplings. Here we planted single rows with the plants 60 cm from each other and the rows 1,5 m apart. The only problem we had with the tomatoes planted outside was to control the amount watering when it rained.


By the end of December the seedlings in the plastic covered tunnel had grown into huge plants and the fruit began to set. Using baling twine we guided the plants upwards with the help of 20mm plastic pipe cut into 3cm pieces. This proved to be ineffective due to the high temperatures the inside of the plastic vegetable tunnel reached. The stems slipped through the slit cut in the plastic and caused the entire plant to topple over. 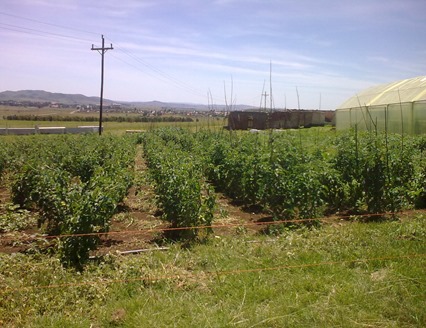 The tomato seedlings planted outside only reached the same stage as those in the plastic tunnel about 6 weeks later. The photo above was taken on 12 February 2012. 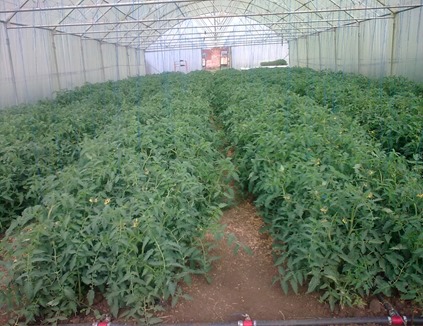 The photo above was taken on 29 December 2011 inside the tunnel. We were excited about the rapid growth of the plants. Little did we know that in the space of one week, our elation would turn to despair when the unpruned plants outgrew us. The photo below was taken on 3 January 2012. Five days made the difference between manageable and out of hand. 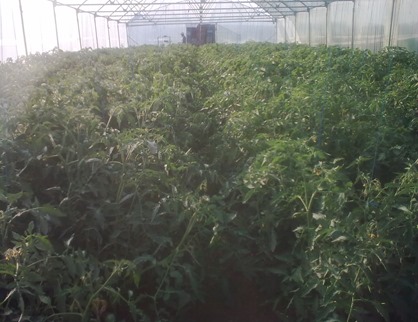 For days all we did was prune the plants into shape again. This was a lesson well learned and one we vowed not to repeat. Having to prune the plants in mid-summer heat also brought home the fact that the plastic tunnel had too little ventilation and the temperatures were much too high for successful tomato production.


As to whether we will germinate our own seed or buy seedlings - I think the answer is obvious. It is definitely more economical to buy seedlings than germinate your own seed. It might not be as rewarding, and if you have a small garden it is worthwhile going that route. But for mass production in a high tunnel, buying the seedlings just makes more sense.

Next time I share what we learned about pruning.